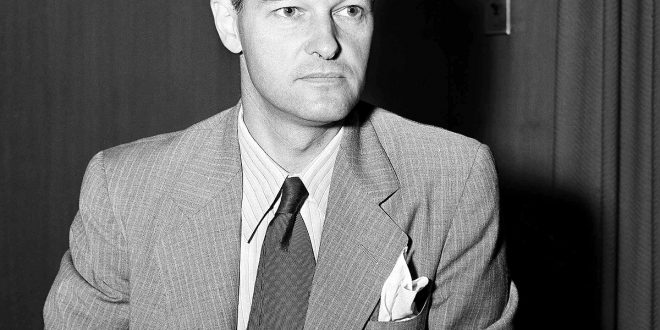 With the publication of John Lewis Gaddis’s new book George F. Kennan:  An American Life(Penguin Press, 2011), the name of the former dean of the American diplomatic corps is once again on the national radar screen.  When George F. Kennan died on March 17, 2005, at the age of 101, few Americans were aware that he had become a staunch advocate of the peaceful dissolution of the American Empire and of the fledgling Vermont independence movement.  Although best known as the father of “containment,” the mainstay of American Cold War policy, Kennan first revealed his radical decentralist tendencies in his 1993 book entitled Around the Cragged Hill.

We are, if territory and population be looked at together, one of the great countries of the world—a monster country, one might say, along with such others as China, India, the recent Soviet Union, and Brazil.  And there is a real question as to whether “bigness” in a body politic is not an evil in itself, quite aside from the policies pursued in its name.

Although virtually unnoticed by the media, Ambassador Kennan came right to the brink of calling for the peaceful break-up of the United States in this book.

I have often diverted myself, and puzzled my friends, by wondering how it would be if our country, while retaining certain of the rudiments of a federal government, were to be decentralized into something like a dozen constituent republics, absorbing not only the powers of the existing states but a considerable part of those of the present federal establishment.  I could conceive of something like nine of these republics—let us say, New England; the Middle Atlantic states; the Middle West; the Northwest (from Wisconsin to the Northwest, and down the Pacific coast to central California); the Southwest (including Southern California and Hawaii); Texas (by itself); the Old South; Florida(perhaps including Puerto Rico); and Alaska; plus three great self-governing urban regions, those of New York, Chicago, and Los Angeles—a total of twelve constituent entities.  To these entities I would accord a larger part of the present federal powers than one might suspect—large enough, in fact, to make most people gasp.

About American imperialism, Kennan had this to say in the same book:

There is a further quality of greatness of size in a country that deserves mention here.  One might define it as the hubris of inordinate size.  It is a certain lack of modesty in the national self-image of the great state—a feeling that the nation’s role in the world must be equivalent to its physical size, with the consequent relative tendency to overweening pretensions and ambitions.  I don’t mean to say that the great power is always and everywhere imperialistic.  There have been times, to be sure, when the United States was very much that.

Between February 7, 2001, and February 14, 2003, I received ten personal letters from Ambassador Kennan and several telephone calls.  The subject was always the same—secession, the peaceful dissolution of the United States with Vermont leading the way.  Kennan was a closet secessionist.

In January 2001 I sent him a copy of my book with William H. Willimon entitled Downsizing the U.S.A., a book which unabashedly called for Vermont independence as a first step towards the peaceful break-up of the Union.  On February 7, 2001, Professor Kennan responded,

There can be no doubt of the closeness of many of our views.  But we are, I fear, a lonely band; until some of the things we have written are discovered by what we may hope will be a more thoughtful and serious generation of critics and reviewers, I am afraid we will remain that way.  I, in any case, being just on the eve of my 97th birthday, can no longer look forward to continuing the battle.  Writing is becoming difficult for me.  Let me wish you well in your own struggle for understanding. Much of your thinking must at least, I feel, a breakthrough.

Then on April 3, 2001, I received a letter from Ambassador Kennan’s secretary Terrie Bramley at the Institute for Advanced Study at Princeton in which she said,

Mr. Kennan asked me to tell you how sorry he is that he is unable to pursue the correspondence with yourself further than he did, but his health is demanding his respect.  He asked me to tell you that…he felt much more well inclined to your suggestion that the state of Vermont should demand its independence.

On October 22, 2001, Ambassador Kennan dictated the following letter from his sick bed to Terrie Bramley.

I am, for reasons of age and health, not normally able to reply in person to incoming letters.  I am, however, trying to make an exception in the case of your recent letter (I seem, unfortunately, to have mislaid) because the content of it interests me greatly at this final stage in my life, and I have a few thoughts about it that I would like to see put into written form before it becomes too late.

You cited in your letter, if my memory is correct, the views of a lady in Maine who urged the establishment of independence for the three states of Main, New Hampshire, and Vermont and their union with certain political entities of Canada to form something resembling a northeast federative state, separated from both the U.S. and Canada.  And while I cannot comment on that part of this vision that suggests the inclusion of what are at present parts of Canada (I know too little about them), I write to say that in the idea of three American states ultimate independence, whether separately or in union, I see nothing fanciful, and nothing towards the realization of which the efforts of enlightened people might not be usefully directed.  Such are at present the dominating trends in the U.S. that I can see no other means of ultimate preservation of cultural and societal values that will be not only endangered but eventually destroyed in an endlessly prolonged association of the northern parts of New England with the remainder of what is now the U.S.A.

Let me have said that, now add a few thoughts, some of a cautionary nature, the others essentially encouraging.  Any attempt to separate territories from the remainder of the U.S. could, if it were to be any less than tragically unsuccessful, have to be gradual and protractive.  It has long been an established principle in my own mind that no abrupt attempt at change (or even ostensibly achieved change) in the lives of entire peoples can have enduring useful effects.  To be successful, changes of this nature must proceed in close companionship with comparable developments in the minds and customs of the peoples in whose lives they are to take place; and such changes take time and patience. For this reason, the changes that the lady from Maine envisaged could, if they are going to have any prospects for enduring success, only be slow ones, gradually and patiently pursued.  With this in mind, it occurs to me that those who would like to see such changes brought about could do worse than to study and consider the protracted historical process, both patient and non-violent, by which the Canadians succeeded in extracting themselves from the original dependence upon London and achieving complete independence.

One ought also to have in mind the experience and responses of other parts of the country which have either immediate boundaries with Canada, or as in the case, with the regions of relative compact Scandinavian immigration, in Minnesota, South Dakota, and my native Wisconsin.  In some instances, particularly in the relationships between the cities of Spokane and Vancouver, the relations seemed to have achieved a higher degree of natural intimacy that could be said to exist between either of those places and southern California or Ottawa.  Such consultations ought to be useful for anyone contemplating a closer relationship between extreme northeastern regions of our country and neighboring parts of Canada. While, as I have said, any significant change will have to be a gradual one, it is therefore, to my mind, neither fanciful or unjustified to us to hold in mind at this time the whole problem of the future development of the relationship with the northern parts of this country and their immediate Canadian neighbors.

I offer these thoughts to you, for whatever they are worth.  My present state of health excludes any possibility of my writing about any of this for publication.  But I thought that you, more than anyone else of my acquaintance, ought to know the directions in which my thoughts are leading at this late stage in my own life. With all best wishes, I remain,

On May 1, 2002, Mr. Kennan wrote, “All power to Vermont in its effort to distinguish itself from the USA as a whole, and to pursue in its own way the cultivation of its own tradition.”

By far the most poignant of all of the letters which I received from Professor Kennan was a handwritten one dated August 1, 2002.  In the concluding paragraph, he said,

I continue to be of poor and deteriorating health, and too much should not be looked for from me.  But my enthusiasm for what you are trying to do in Vermont remains undiminished, and I am happy for any small support I can give to it.

My last letter from Ambassador Kennan was written on February 14, 2003, two days before his 99th birthday and just prior to the beginning of the war with Iraq.  In this letter, he expressed concern about the negative political impact which the war might have on the Vermont independence movement.

Although I never heard from him again, George Kennan was a major source of inspiration for the Second Vermont Republic, Vermont’s independence movement.  In every sense of the word, he was truly the godfather of the movement.