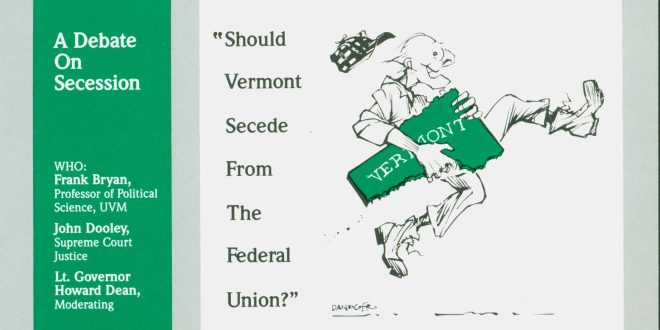 Michael Smith February 12, 2019 Vermont Republic Comments Off on It’s Time to Liberate Ourselves From the Use of the Word Secession 334 Views

To the vast majority of Americans, whether they be from the political Left or the political Right, secession is anathema. Abraham Lincoln really did a number on us one hundred fifty years ago.  He convinced most of us that secession is immoral, illegal, and unconstitutional.

Secession may very well be the most emotionally charged word in American English.  No term is considered to be more politically incorrect.  What immediately comes to mind whenever this provocative word is spoken is the Civil War, slavery, violent militias, and racism.  Never mind the fact that the United States was born out of the secession of thirteen colonies from the British Empire.

A very high percentage of otherwise well-educated Americans neither know how to spell secession nor how to pronounce it. Invariably they write or say succession when they actually mean secession.

However, there is another perfectly good word which captures the very essence of what it means to secede.  That word is liberation. Liberation may either refer to “the act of setting free” or “the condition of being set free.”  Many Vermonters, for example, want to secede from the Union so as to liberate themselves from the White House, Congress, the Democratic and Republican Parties, the Supreme Court, the Pentagon, the War on Terror, the right-wing Israeli Lobby, the Federal Reserve Bank, the federal deficit, fiat currency, Wall Street, and Corporate America.

As secessionists, we need gradually to wean ourselves away from the use of the word secession and replace it with the more positive term, nonviolent liberation.  We should refer to ourselves as a liberation movement rather than as a secession movement.  The Civil War ended a long time ago and with it ended the possibility of ever having an intelligent conversation about the merits of secession. Among American political, media, academic, spiritual, and literary leaders secession remains strictly taboo.

The liberation of Vermont starts now!