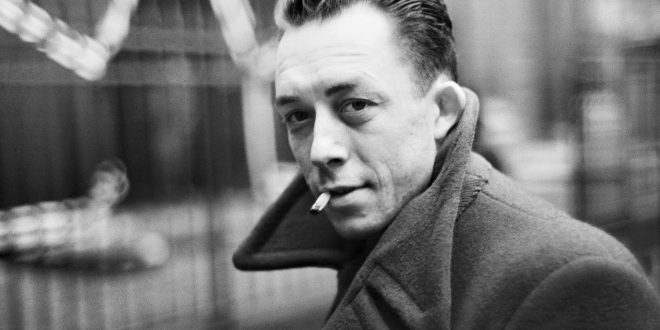 When I first read Albert Camus’s The Stranger as a college student in 1957, it went right over my head.  I was clueless as to what this book was about. When I re-visited it twenty-five years later, I was so taken by Camus that I soon read everything that he had written which had been published in English.

Born in Algeria in 1913, Camus became the editor of the French Resistance underground newspaper Combat in Paris during World War II and was awarded the Nobel Prize for Literature in 1957.  He died in an automobile accident on January 4, 1960.  A card-carrying agnostic, who struggled with Christianity throughout his life, Camus had an uncanny grasp of the human condition and an unwavering predisposition towards rebellion against it.

His English-speaking followers have recently been afforded a long-awaited treat with the publication of a 208-page photograph album (in English) edited by his surviving daughter, Catherine Camus, Albert Camus: Solitude and Solidarity (Edition Olms, 2012).  It is truly delightful.

I believe that Camus figured out many of the important pieces of the puzzle of life, but because his own life was prematurely snuffed out by a tragic accident, he never got around to connecting the dots.  Be that as it may, Camus’s philosophy of life appears to rest on three interconnected theories: a theory of the absurd, a theory of rebellion, and a theory of death.

What we are all up against is the human condition, God’s gift to us in the Garden of Eden from which there is no escape – separation, meaninglessness, powerlessness, and death.  Not a pretty sight.  To Camus it was absurd that we are all separated, our lives are meaningless, we are powerless to influence our fate, and we are all going to die and face nothingness.  From the absurd flowed three consequences for Camus – his revolt, his freedom, and his passion.

About separation, Camus wrote an entire essay in 1944 entitled “The Tragedy of Separation.”  “The meaning of life is the most urgent of questions,” he said in The Myth of Sisyphus, but “I continue to believe that this world has no ultimate meaning.”  No doubt his feelings of powerlessness were influenced by his recurring bouts with tuberculosis which he first contracted in 1930 with relapses in 1936, 1942, and 1949.  As for death, “We know it ends everything,” and results in eternal nothingness.  “Eternal nothingness is made up precisely of the sum of lives to come which will not be ours.”  But, “There is no freedom for man so long as he has not overcome his fear of death.  One must be able to die courageously without bitterness.”

About the absurd Camus said:

It is only by repeatedly revolting against the absurdity of his predicament, without appeal or hope beyond it, that a human being fully expresses the absurd relationship.  Only the person who sees clearly what in the final analysis is his ultimately tragic and trusting situation relative to his world and remains actively unreconciled to it can be said to “live out the absurd.”

In response to the absurd there are four options – escape, denial, engagement, and confrontation.

First, we may escape the human condition altogether through suicide.  “There is but one truly serious philosophical problem,” said Camus, “and that is suicide.”  We have to come to terms with the question of  “whether life is or is not worth living.’  To Camus suicide was a complete cop out – the refusal to come to terms with the human condition.  The decision to take one’s own life is tantamount to a decision to leave the game to avoid struggling with life’s tough questions.  To commit suicide is to opt for immediate, permanent nothingness rather than risk experiencing separation, meaninglessness, powerlessness, and fear of death.  It represents the ultimate form of despair in which our humanity is trumped by nothingness.

Second, we may deny the human condition through a life based on having – owning, possessing, manipulating, and controlling people, power, money, machines, and material wealth.  Through having we try to find security and certainty in an otherwise uncertain world.  But the benefits of having may be illusory and transitory suggests Erich Fromm:  “If I am what I have and what I have is lost, who then am I?’

Third, we may choose to engage the human condition through being – by our creations, our personal relationships, our spirituality, our sense of community, and our stand towards pain, suffering, and death.  But being may also be another form of denial of the human condition, a form of escapism – escape from the absurdness of what it means to be a human being.

Fourth, we may confront the human condition and peacefully rebél against separation, meaninglessness, powerlessness, and death.

“Rebellion,” according to Camus, “is born of the spectacle of irrationality, confronted with an unjust and incomprehensible condition.  It protests, it demands, it insists that the outrage is brought to an end and that what has up to now been built upon shifting sands should henceforth be founded on rock.”

To rebél is to confront the human condition head-on, to face down separation, meaninglessness, powerlessness, and death.  The problem said Camus is that “The rebel refuses to approve the condition which he finds himself.”  And, “he is willing to sacrifice himself for the sake of a common good which he considers more important than his destiny.”

The rebel “confronts an order of things which oppresses him with the insistence on a kind of right not to be oppressed beyond the limit he can tolerate.”  Continuing Camus says that “It is those who know how to rebél at the appropriate moment, against history who really advance its interests.”

Camus’s rebellion was nonviolent.  He was not into human killing.  In his view killing was grounded in nihilism, and to attack nihilism with another form of nihilism made little sense.  “To kill men leads to nothing but killing more men.”

“Being aware of one’s life, one’s revolt, one’s freedom is living,” but “The point is to live.”

Unlike Jesus’s rebellion against the human condition which was grounded in hope, Camus’s was not.  Camus frequently reminded us that his rebellion was always without hope of affecting the human condition.  There was no “pie in the sky” in Camus’s world.  “I share with you the same revulsion from evil.  But I do not share your hope, and I continue to struggle against this universe in which children suffer and die.”

No words of Camus were ever more prescient than, “We are suffering a reign of terror because human values have been replaced by contempt for others and the worship of efficiency, the desire for freedom by the desire for domination.  It is no longer being just and generous that makes us right; it is being successful.”  And what should we do about this?  Rebél.

Rebellion provides us with the faith to claw meaning out of meaninglessness, the energy to connect with those from whom we are separate, the power to surmount powerlessness, and the strength to face death rather than deny it.

As Erich Fromm said in To Have or To Be, “We are a society of notoriously unhappy people: lonely, anxious, depressed, destructive, dependent – people who are glad when we have killed the time we were trying so hard to save.”  “Men die, and they are not happy,” proclaimed Caligula in Camus’s play bearing his name.  The sense of angst among many is so strong that, “There is only one hell and it is on earth,” said Camus.

Beginning with his first novel A Happy Death, which was not published until after his death in 1960, Camus returned over and over again to the theme that the purpose of life is not to be happy, as many would have us believe, but rather to die happy.  In Camus’s novel The Stranger, as well as in his four plays Caligula, The Misunderstanding, State of Siege, and The Just Assassins, the theme was always the same – die happy.

But if one expects to die happy, one must first rebél.  Above all, according to Camus, there must be “a will to live without rejecting anything of life, which is the virtue I most honor in this world.”  Not surprisingly, Camus was opposed to murder, suicide, and the death penalty.  His sense of personal meaning and values gave high priority to courage, pride, love, community, and social justice.  In addition, Camus felt a strong affinity with the poor and the underprivileged.

In no sense is dying happy a euphemism for radical individualism or hedonism.  This is not superficial self-help, self-esteem, feel-good philosophy aimed at the “me” generation.  To die happy one must first assume personal responsibility for the meaning of one’s life.  Living means coming to terms with, rather than avoiding, spiritual, intellectual, emotional, and physical pain and suffering.  To have a happy death we must confront the human condition through rebellion.

Those who die happy scrupulously avoid being sucked into the seductive lifestyle and subsequent angst of the living dead.  One reason so few of us die happy is that we refuse to plan for the one event in our life which is absolutely certain – our own death.

The punch line is blunt and undeniably clear.  Life is truly absurd and without hope, and there is no rational reason to believe that tomorrow or the day after will be any different from today.  Therefore, rebél, live and try to die happy.  That’s the sum total of it.

Did Camus die happy?  Catherine Camus’s photograph album suggests that he most likely did.

A salon of eight or ten persons, where all the women have had lovers, where the conversation is lively and anecdotal and a light punch is served shortly after midnight, is the one place in the world where I am most comfortable.