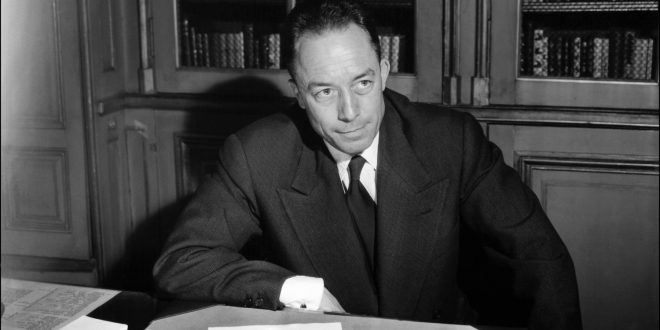 Rebél Against the Human Condition and Empire

Michael Smith April 19, 2019 Vermont Republic Comments Off on Rebél Against the Human Condition and Empire 263 Views

What are the people of Germany doing?  Sleeping.  Their sleep is filled with nightmares and anxiety, but they are sleeping.  We have awaited their awakening for so long, yet they continue to remain stolid, stubborn, and silent as to the crimes committed in their names as if the entire world and its own destiny had become alien to them.  All agree: the German people slumber on amid the twilight of their gods.  They do not love liberty, because they hate criticism.  That is why they are sleeping today.

Albert Camus’s insightful description of life in Nazi Germany, which appeared in the clandestine Resistance newspaper Combat a few weeks after the Liberation of Paris, could just as well have been written about life in the United States today.  Not unlike the people of Nazi Germany, the American people are also asleep.

We have slept through over two decades of technofascism—the melding of corporate, state, military, and technological power by a handful of political elites which enables them to manipulate and control most of the population.  Technofascism has evolved into a global system of dominance and deceit in which ostensibly free individuals allow transnational megacompanies and big government to control their lives through money, markets, media, and technology resulting in the loss of political will, civil liberties, collective memory, and traditional culture.  It includes, but is not limited to, affluenza, technomania, e-mania, megalomania, robotism, globalization, and imperialism.

While claiming to be individualists, we behave as world-class conformists.  We think the same, share many of the same religious beliefs, vote the same, watch the same TV programs, visit the same websites, and buy the same low-priced Chinese plastic yuck from Wal-Mart.  “All the women are strong, the men are all good looking, and all the children are above average,” just as they are in Garrison Keillor’s mythical Lake Wobegon.  And we all pretend to be happy.  But is it really true?

Even though we spend $10 trillion annually on consumer goods and services, $2.5 trillion of which is for health care, and billions more on spiritual gurus and religious shaman, are we as happy as we pretend to be?  I think not, because what we are up against is the human condition, God’s gift to us in the Garden of Eden from which there is no escape – separation, meaninglessness, powerlessness, and death.  Not a pretty sight.  Our feel-good religious and spiritual leaders to whom we turn for solace try unsuccessfully to sugarcoat it.  French existentialist Albert Camus called it absurd.

What are our options in terms of possible responses to the existential angst produced by the human condition?  Escape, denial, engagement, and confrontation.

First, we may escape the human condition altogether through suicide.  We may choose death and nothingness now over the pain and suffering associated with separation, meaninglessness, powerlessness, and fear of eventual death.

Second, we may deny the human condition through a life based on having—owning, possessing, manipulating, and controlling people, power, money, machines, and material wealth.  Through having we try to find security and certainty in an otherwise uncertain world.  Our compulsive desire to have often leads to technofascism.

Third, we may choose to engage the human condition through being—by our creations, our personal relationships, our spirituality, our sense of community, and our stand towards pain, suffering and death.  So-called simple living is a popular form of being.  But if the world is going to hell in a handbasket, for how long can a life based only on being allayed our angst?

Fourth, we may confront the human condition and peacefully rebél against the money, power, speed, greed, and size of the icons of the Empire—the White House, the Congress, the Pentagon, Wall Street, the Internet, Fox News, Wal-Mart, McDonald’s, as well as the churches, schools, and universities which suck up to them.

Rebél is a philosophy of rebellion.  It provides us with the faith to claw meaning out of meaninglessness, the energy to connect with those from whom we are separate, the power to surmount powerlessness, and the strength to face death rather than deny it.  Since the word rebel has more than one meaning, we use Rebél to connote resistance to authority and control.

If life is absurd, is there any reason to believe that tomorrow or the day after will be any different from yesterday or the day before, as in the movie Ground Hog Day starring Bill Murray?  Even though no cosmic source of meaning has been revealed to us, we find ourselves drawn to Camus’s idea that the purpose of life is to die happy and that the path to a happy death leads straight to rebellion.

Therefore, rebél against the human condition and the Empire, live life to the fullest, and try to die happy by mindfully defining your personal legacy, which some call your soul.

But Rebél is not for everyone, particularly not the faint of heart, for it offers no spiritual elixir or magic potion to relieve our existential pain.  It is neither a fire insurance policy against hell, nor a ticket to heaven.  It is not a touchy-feely, self-help, feel-good, be-happy philosophy promising pie-in-the-sky to its adherents.  Religious fundamentalists, pacifists, and those in search of a spiritual nirvana are not likely to be drawn to Rebél. Although it may not be what we learned in Sunday School, it surely beats nothingness.

Rebél is about the peaceful denunciation, demystification, and defiance of the tyranny of ciphers.  Its radical imperative involves disengagement, decryption, decentralization, downsizing, and dissolution.

Previous Getting a job in Vermont: avoid these four common résumé mistakes
Next The Myth of Bernie Sanders