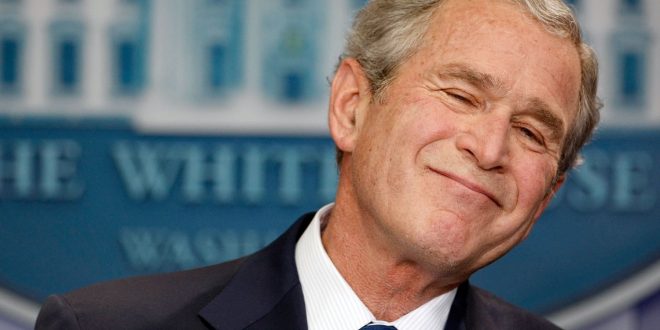 Neoliberalism: Neoconservatism Without a Smirk

It has become increasingly obvious that the only difference between Barack Obama and George W. Bush is that the famous Bush smirk has been replaced by the Obama smile.  The neoconservatism of Dick Cheney, Paul Wolfowitz, and Bill O’Reilly has given way to the neoliberalism of Bill Clinton, Timothy Geithner, Bernie Sanders, and Chris Matthews.  The differences between neoliberalism and neoconservatism are similar to the differences between Coke and Pepsi, virtually nil.

Neoconservatism is best defined by its foreign policy agenda which includes full spectrum dominance, imperial overstretch, nuclear primacy, the right of pre-emptive strike, and unconditional support for the State of Israel.  Although neoliberals are much less bellicose in their rhetoric than their neoconservative counterparts, they passively acquiesce to the neocon foreign policy paradigm.  They do little or nothing to end the wars with Iraq and Afghanistan as well as the annihilation of Palestine carried out by our close ally Israel.  Obama’s Nobel Peace Prize acceptance speech in Oslo was little short of a global call to arms couched in the language of the doctrine of “just war.”  Although neocons make it abundantly clear that they are military hawks, most neoliberals are closet hawks as well.

Consider the case of Vermont Senator Bernie Sanders, the darling of the Left, who pretends to be a socialist, which he is not.  Not only does Sanders support all military appropriation bills and military aid to Israel, but he is currently promoting the opening of a satellite facility of the Sandia Corporation in Vermont.  The Sandia Corporation, a subsidiary of Lockheed Martin Company, develops, creates, maintains, and evaluates nuclear weapons systems.  Sandia’s roots go back to the Manhattan Project in World War II.  Just what peace loving Vermonters need, a nuclear weapons manufacturer located in their own backyard.

Both neolibs and neocons are apologists for globalization and are steeped in the ideology that bigger, faster, and more high-tech make better.  In their heart of hearts neolibs and neocons know that only the federal government can solve all of our problems, failing to realize that the federal government is the problem.  Both embrace corporate socialism, socialism for the rich, and the social welfare state while pretending to be opposed to publicly financed social welfare.  It’s all about people of the lie.

Neoliberals pretend to be concerned about inequities in the distribution of income and wealth.  Neoconservatives make it abundantly clear that they couldn’t care less.

Both neolibs and neocons are authoritarian statists each with their own definition of political correctness.  Politically correct neolibs are expected to be pro-abortion, pro-gay-lesbian, pro-affirmative action, pro-Israel, pro-gun control, anti-clerical, pro-big government, and pro-American Empire.  Anyone who does not conform to this litany or who associates with those who do not, is at risk of being attacked by a left wing truth squad such as the Southern Poverty Law Center and accused of the likes of homophobia, racism, anti-semitism, religious fundamentalism, or even hate crimes. Politically correct neocons are more likely to be pro-life, anti-gay-lesbian, anti-affirmative action, pro-Israel, anti-gun control, pro-clerical, pro-big government, and pro-Empire. Both are vehemently opposed to secession.

Above all, what neoliberals and neoconservatives have in common is that they are technofascists.  Benito Mussolini defined fascism as “the merger of state and corporate power.”  Technofascism is the melding of corporate, state, military, and technological power by a handful of political elites which enables them to manipulate and control the population through the use of money, markets, media and the Internet.

Neoliberals and neoconservatives alike march to the beat of the same drummer – the largest, wealthiest, most powerful, most materialistic, most racist, most militaristic, most violent empire of all time.

Ultimately the differences between neoliberalism and neoconservatism are purely cosmetic.  You may either have your technofascism with a smirk or you can have it with a smile.