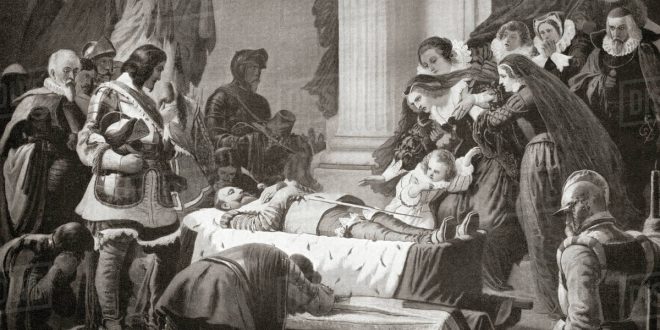 When one thinks of royalty, famous and great kings and beautiful princesses come to mind first. Their lavish castles and fortresses, huge wealth and big armies come next, and perhaps even their territories. However, history is full of weird royals. What do we mean by weird royals? Everything is included in the following list, from psychopaths to murderers and savages. Some were just not right in the head, while others were always controversial and suspicious. Read on to learn about 21 weird royals.

As the rest of the women of the era, she was to give her husband a male heir. She failed to do so, and decided the right move was to kill her daughter, Christina, by pushing her down the stairs. When King Gustavus died, she lost it and did not want to bury him for more than a year, and slept under a casket with his heart in it.

During a chaotic time and turmoil, he suffered from fever and convulsions. He went insane after 1392 and was plagued by paranoia and rages. He was homicidal and dangerous. Most famously, he suffered from glass delusion and believed his body was of glass. When the delusion kicked in, he was still for hours, while he was running about when it went away.

The husband of Catherine the Great, he was tutored by a sadistic person. He was left in a state of arrested development. He hated Russians and they hated them. He was a bad match for Catherine, as he was a man-child. It is possible they never consummated their marriage, as he wanted to play with toy soldiers in bed and dress up in military gear. He once called his wife a whore while drunk, and held a court-martial for a rat that bit of the head of one of his toys.

Nero’s mom married her uncle Claudius and convinced him to make Nero Emperor instead of his own son. She then poisoned him. Nero learned well from her and removed anyone who bothered him when he came to power, including her and his wife. He had multiple wives and lovers and spent a fortune on s*xual pursuits. He murdered anyone who criticized him. When a great fire broke out in Rome in 64 AD, it destroyed 75% of the city. It is thought he started it to clear space for a new castle. The worst part is that he did nothing to stop the flames. He also married a random man who looked to him like his second wife he had killed. He made the man dress like a woman, while he had another relationship where he dressed as a woman.

He was a proper hedonist and enjoyed watching others suffer. His endeavors are many:

-He chained naked women to chariots like horses and whipped them while they pulled it.

-He released poisonous snakes into the audience of the gladiator games and watched the crowd panics and die.

-He tied dinner guests to a water wheel and watched them slowly drown.

-He tossed gold and silver from the balcony and enjoyed while poor people fight and die over it.

-He let lions and leopards loose during a feast.

-He filled positions in the government based on the sizes of peni*es.

-He stabbed an advisor to death after he suggested he should live a modest life to prevent revolt over taxation.

Sado was a cruel and violent son, who was obsessed with pleasing his father King Yongjo. Sado suffered from delusions and nightmares since he was 10, and it constantly got worse. He went insane over trying to please his father, while he was equally crazy about torturing his son. Sado indulged in his vices, as he threw al*ohol-fueled orgies although alc*hol was illegal. He sent dead bodies out of the palace each day, murdered a concubine and slept with a nun. He also tried to seduce his younger sister. When the king learned about some of this, he locked him in a giant chest where he starved to death after eight days.

Ivan was the first and the most famous Russian tsar. He was known for his rages from an early age. Since gaining power in 1847, he expanded his kingdom. He started to lay, terror, depressed after his wife passed. This state lasted for 24 years, a period when he murdered nobles who were against him, beat his daughter-in-law after which she had a miscarriage, and murdered his son during a rage by hitting him on the head. Allegedly, he blinded the architect of St. Basil’s Cathedral, so that he cannot make another building as great as that one.

Caligula believed he was a real god and forced his subject to worship him like one. After his adoptive father Tiberius died, possibly by Caligula’s hand, he eliminated his son and became emperor. He became vile after several months and killed those who opposed him. He replaced the heads of the statues with is busts. A group of guards killed him.

The daughter of Ferdinand and Isabella famous for sending Columbus to find India, she married Philip I of Burgundy, son of the Holy Roman Emperor. She gave him six children who were emperors and queens and was a devoted wife. However, she earned a nickname “Juana La Loca” because she kept her husband’s dead body with her at all times.

The ruler of Byzantium from 565 to 578 AD, he was prone to acts of madness. He would behave so strange that people around him thought a devil possessed him. Sometimes he tried to bite others and demanded organ music to calm him down. When they tried to calm him, he cried, laughed, made animal noises and hit them.

He became king at the age of 16 in 1766 and never acted a day older than this in his life. He had a habit of unhealthy doses of mast*rbation and played pranks on his grandmother. He ran in the streets, destroyed shops, and patronized brothels. He would also leapfrog dignitaries when they bowed to him. His doctor sought to rise to power but was caught alongside the queen by his stepmother.

This royal was Passionate about the pursuit of pleasure and the world of make-believe, so he installed eunuchs in all positions of power. He also let them run the government. He had such a large harem that some women starved because there was not enough food for all. In addition, he set up entire settlements to play make-believe and act as a shopkeeper or a general.

Mustafa I – Sultan of the Ottoman Empire

Mustafa had a strange childhood. A tradition was to execute the younger brother when stepping on the throne, but his older brother spared him and kept him in a windowless prison. He remained there for 14 years and had major mental health issues. He went to the throne straight from the cage when his brother passed. He would constantly go back to his prison and abducted the throne.

Ibrahim I – Sultan of the Ottoman Empire

He succeeded his brother in 1640 and was an inept ruler from the start. He had a harem of 280 women, while his mother ruled instead, at least until he banished her. His most famous moment came when he went mad and drowned his entire harem. He was imprisoned by the people after imposing high taxes and was strangled to death.

Is there anything more bizarre than being the real-life namesake of the Dracula? Born in 1431 in today’s Transylvania, his father was a member of the Order of the Dragon, devoted to defeating the Ottomans. Therefore, he bared the name “Dracul”, or “Dragon”. Vlad was, therefore “The Son of Dracul”, or Dracula. He spent his childhood captured by the Turks. When he returned home, he reclaimed the throne and invited hundreds of nobles to dinner, only to have them stabbed and impaled on stakes. He would also nail turbans to the Turks’ heads if they did not remove them.

Erik was a charming and handsome king before paranoia made him mad. He took the throne in 1560 and was in a constant battle against his brother over the throne. His mind faded over time, and he was schizophrenic, with frequent mood swings. He sentenced people to death for annoying him and executed anyone who giggled around him. He went too far when he killed a nobleman by stabbing him, after which his guards killed various other aristocrats in prison.

Born as Zhao Zheng in 259 BC, he is one of the most famous Chinese rulers. He united the Chinese states into a country after became king of a small state at 13 and having his mother’s lover killed. Quin declared war on the intellectuals and burned books. He buried 460 intellectuals alive for speaking against his quest for eternal life. He is best known for being buried with an army of terra cotta warriors.

According to the Bible, more specifically the Book of Daniel, this Babylonian king went mad for seven years and retreaded from the society completely in order to live like an animal. He ate grass. It is not completely familiar which of the two rulers did this, or was it one of their sons of the same name.

George III was the monarch during the American Revolution. His madness and bad politics influenced the colonies in the best way. During one of his many rants of insanity and madness, his servants had to restrain him using a straitjacket. His madness is associated with either a metabolic disease called porphyria, or arsenic poisoning from various medicines or cosmetics. Amazingly, he is the longest ruling king in the history of Britain.

This German monarch is best known for spending his money and time while in power on building countless elaborate and fantastical castles throughout his state. The most famous is Neuschwanstein, a castle that inspired Walt Disney’s design for both Cinderella and Sleeping Beauty’s signature castles. Except this, he is known for dressing up and play-acting as a child, isolating himself from everyone. He shied away from his royal duties and invented a fantasy world for himself. He thought himself to be Parzival, who was a medieval figure associated with the Holy Grail. He was declared insane by the government after so much spending. He was found dead the next day, along with the person who declared him medically insane.

Catherine the Great – Empress of Russia

Unlike the rest of the list, she was not a bad ruler by any means. She reformed her country and male-female monarchs look strong and capable in a time of man. It was her private life that was controversial. She was born in Germany as Sophie von Anhalt-Zerbst and married number 3. On our list, Peter III. Since he was like that, she looked elsewhere for her needs. She later conspired against him with the nobles and had him killed, aided by the brother of her lover, Gregory Orlov. Since then, she went through countless lovers and gifted them with money and titles. One was even the King of Poland, whom she attacked. There is a myth that she died during intercourse with a horse.

These were the weirdest royals in history. Whom do you find the most shocking, and were you aware of their craziness?

Previous Top 9 Bizarre Objects That Henry VIII Owned?
Next 10 Weird Facts about Technology That Are True?