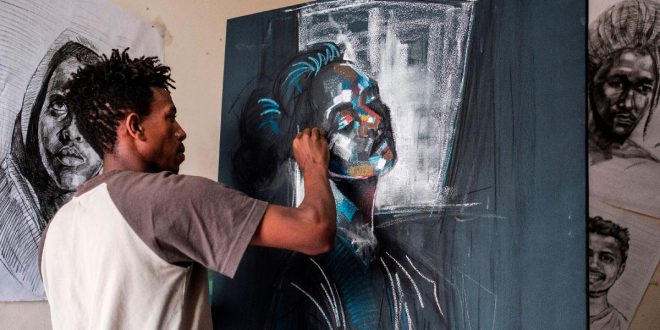 Ed Dillinger May 4, 2020 History Comments Off on 5 Famous American Artists and Their Paintings 359 Views

Art exists in almost every part of the world. Art is what makes the world go round, and art changes as every year go by. Painters are people that gain a lot of amazing reputation and value in society. They are appreciated for their ability to make people feel good by looking at their aesthetic creations, and some of them are paid quite a lot, with certain artworks that cost millions even after so many years.

We’ve all heard about some famous painters, some of us even idolize them. Leonardo Da Vinci, Vincent Van Gogh, Michelangelo or Pablo Picasso, are all the masterminds of different periods, and people love their work.

Today, we are going to focus on American Artists and their famous paintings, so if you are eager to learn some more, feel free to stay with us until the end. Let’s take a look.

This picture is originally called “Freedom From Want”, but nowadays people refer to it as The Thanksgiving Picture, probably because it is easier to remember that name. As the title says, it has been painted by Norman Rockwell, and it features an entire family gathering up for thanksgiving dinner, while the grandmother is serving fresh turkey in a large plate.

The painting is incredibly well-detailed and it looks stunning. The people in this picture are not chosen randomly, they are the friends and family of the artist. People say that Norman believed that a family is the most precious thing a person can have, and he wanted to express this through art, so he created this wonderful artwork.

If you are a lover of abstract art and paintings that have a different meaning for everyone, then you’ll like this one. Number Five is a painting made by Jackson Pollock and he managed to create it by using a very famous yet hard-to-master technique called drip painting.

Jackson is an artist that is considered to be the best abstract artist in the entire world, after the Russian mastermind Wassily Kandinsky. This masterpiece is made on a fiberboard that has the dimensions of eight by four feet, and it was recently sold for about one hundred and fifty million dollars.

We are not sure what the meaning of this piece is, because everyone says something different about it, but we guess that it’s up to the person viewing it to decide what they want to see in the thousands of lines and shapes being displayed on the fiberboard. Sometimes the beauty in art is the fact that it cannot be explained.

A painting that was made by a very influential artist, James McNeill Whistler, and this one isn’t as complicated as the previous example, but it still managed to become a very influential artwork in America’s motherhood. A very interesting fact is that back in 1934, the post office of the United States used this picture as a reference to make a stamp that said: “In Memory and Honor of the mother of America”. We can already tell that people fell in love with this artwork, and it is amazing. Did we mention that it features the mother of the artist? Yes, the lady in the picture is Anna McNeill Whistler. For more amazing artwork and interesting information, you can read more here.

John Singer Sargent spent a lot of time in Paris, and some of that time was when he was making this painting, but he is still considered as one of the most influential American artists despite his residue. In his mid-twenties, John was trying to make a name in the world of art, and this is what got him the most credit.

The picture features a lady that has been known in the French circles for her outstanding beauty, and at the time she was married to a banker who John knew. At first, it wasn’t easy at all to convince madam Gautreau to pose for this picture, but Sargent somehow managed to do it, so years after the marriage happened he finally completed the picture, and he named it The Portrait of Madame X.

Unfortunately, the critics made a lot of fun about the model and the painter, and there was a scandal that was way too much for the young artist to take at the time, so he had to leave Paris and move to London. Either way, it’s the artwork that got this young artist the most fame during that period, so it is safe to say that he achieved his goal, even though the critics were pretty bad.

In the middle of the twentieth century, Andrew Wyeth had a reputation as one of the best United States artists, and he was known for his realistic painting style. His paintings are somewhat abstract, but they have a very realistic touch that makes them very unique.

In Christina’s World, he features a young lady, Anna Christina Olson, and according to the analysts, she was a neighbor of Andrew, so he decided to take a picture for her. Rumors say that one day Wyeth was looking through his window, and he saw Christina crawling through a field, enjoy the beauty of nature and the grass beneath her, so he immediately got inspired and decided to start making this picture.

Later, the painter found out that the young lady was suffering from a condition called a degenerative muscular disorder, and that’s why she was crawling instead of walking normally. Andrew Wyeth decided to dedicate this masterpiece to her. Upon completing the painting, he didn’t get a lot of fame and positive feedback, but just a few years later, the world recognized his work and it soon became a much-appreciated piece of art that’s worth quite a lot.

When it comes to American realism, this picture is considered to be one of the most important ones and it is stored and protected in a special museum. Andrew probably didn’t expect such success with this one.