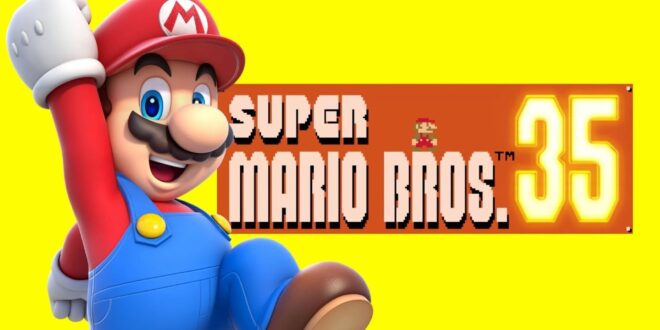 Super Mario Bros. 35 Is Out Now, And It’s Great

It’s official – “Super” Mario, the world’s most famous and iconic video game character, has entered middle age. As of October 2020, the legendary mustache-sporting plumber is 35 years old. That makes us feel very old, so we’d hate to think what it does to the people at Nintendo who invented him. There was never any chance that Nintendo was going to allow the occasion to pass without celebrating it, and so there is a whole range of special Mario anniversary-themed events happening both online and offline this month, and also in months to come. We strongly suspect that the newly-released game “Super Mario 35” is going to be our favorite of them.

If you’re a fan of the classic Mario format, you might want to look away now. We’ve seen many people try to tinker with the format of Mario over the years, and not all of them have gone well. The less said about the 1990s movie the better, and we’re not at all sure about the Mario-themed online slots game “Plumber” either. To be quite frank, we’re not actually sure we should be counting “Plumber” as an official tie-in product because the Nintendo logo and the character’s name are suspiciously absent from the creation of the online slot, but there’s no mistaking the inspiration behind it. As Nintendo is currently looking at new ways to make money from iconic properties, they might approve the creation of a ‘real’ Mario-themed slots on websites like Dove Casino in the future, but that’s beside the point. Here, with “Super Mario 35,” Nintendo has tried to do something new with a very old game. In our opinion, they’ve succeeded admirably.

The first thing you need to know about this game is that it’s free to download and play so long as you have an active Nintendo Switch Online subscription. The second thing you need to know is that this game is total multiplayer mayhem. It almost doesn’t matter how well or badly you play your individual game, because every time one of your opponents defeats an enemy character, that enemy character might get teleported onto your screen for you to deal with. The winner is the last player whose Mario avatar is still alive after dealing with all of those enemies. Somehow, Nintendo has managed to take the format of the “Fortnite” style battle royal and applied it to a thirty-five-year-old game, and they’ve managed to avoid ruining the game in the process.

As this is the 35th anniversary of the first “Super Mario Bros” game, thirty-five people play the game simultaneously. That can make the action a little difficult to keep track of because the screen gets very crowded, but you’ll soon get used to it. What you won’t get used to is the frequency at which ghosts and other goombas appear, and how unexpected their locations are. To make matters worse, you’re more likely to be targeted if you’re running out of time to clear your level, or you’re running out of coins. To put that another way, when things start to get hard, the game makes them even harder by default. There’s no room for error either because your Mario avatar has only one life. Once you’re out, you’re out, and you’ll be sat waiting for the round to finish before you can play again. World 1-1 is just-about survivable without breaking too much of a sweat, but anything beyond that point becomes a free-for-all.

One of the few downsides is that being bad at the game will limit your enjoyment of it. You can only play a level once you’ve unlocked it, so if you can’t get past World 1-2, you’ll be stuck there forever, and you’ll soon get bored of it. The novelty of playing Mario with a battle royal format will keep you addicted for a short while, but that will soon wear off if you can’t find new challenges. If you’re good (or very lucky) though, there are plenty of new challenges to be found. The game comes with daily challenges, exclusive and character-specific unlockables, and a few additional power-ups that you wouldn’t have found in the 1980s version of the game. You should find that the physics are a little kinder than they were back in 1985, too. Nintendo has tried to make this version of Mario accessible to new players at the same time as rewarding those who’ve been Mario fans for most of their lives.

You might be thinking that as a seasoned “Super Mario” veteran, you have a better shot at overcoming the first few levels than most do. You would be wrong. Several reviewers have started the game in the mistaken belief that they’ll survive far longer than most of the people they come up against, and they’ve been in for a nasty shock. As one reviewer put it, this version of Mario has done away with the so-called ‘memory tax.’ What’s meant by this is that under normal circumstances, the appearance and behavior of enemies can be predicted. Through playing the game repeatedly, you know when they appear, what route they take, and how to avoid or defeat them. From there, you can learn a safe pathway through every level and stay clear of trouble. That doesn’t apply here. Enemies appear out of nowhere and cannot be anticipated. In some cases, they can’t even be avoided. It’s a whole new way of playing Mario, and the seasoned pros are just as vulnerable to sudden elimination as any rookie.

From Nintendo’s point of view, the biggest Mario anniversary product released (so far) is “Super Mario 3D All-Stars.” We’re sure there are many people who agree with that assessment, and would rather play a modern game than this rehashed classic, which shows all the signs of its age. To the retro-orientated gamer, however, this is a delight. You don’t get many chances to see a classic re-imagined as boldly as this one has been, and it’s nice to get re-acquainted with an old favorite after so many years. On top of all that, as we said earlier on in the article, it’s free to play for existing subscribers. We can think of worse ways to spend a few hours at zero cost.

Previous Is it Legal to Drive After Vaping CBD?
Next Everything You Need to Know About Laser Therapy

How to Make Money with Old School RuneScape – 2021 Guide