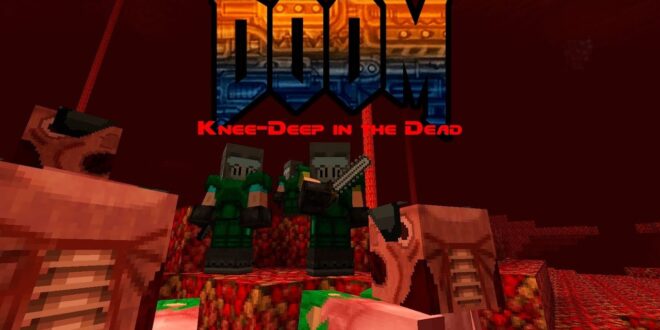 You Can Now Play The Original “Doom” In Minecraft

Gabriel King August 1, 2020 Gaming Comments Off on You Can Now Play The Original “Doom” In Minecraft 568 Views

We’re all lucky enough to be living in an age of video gaming where almost anything is possible. If you want to play big-budget, cinematic games that took teams of hundreds of people several years to create, you can do that on consoles or gaming PCs. If you’re after something more laid-back and arcade-orientated, that’s exactly what Apple Arcade is for. Those of you who are nostalgic for the good old days of video gaming will find that most of the games you remember from your childhood are now available to be played on your mobile phones. If you’re into the more cerebral aspect of gaming, however, you might prefer good old-fashioned “Minecraft” – but even cerebral games show off their ‘fun’ side every so often.

It’s enormously difficult to explain the appeal of “Minecraft” to anybody who’s never played it. Even calling it a ‘game’ can be contentious. It’s more of a world-building simulator where you can go anywhere, do anything, and create anything you like. The graphics are decidedly 8-bit, there’s no “Fortnite” style ‘battle royale’ mode, and the concept of winning or losing anything is an alien concept to most “Minecraft” players, but the sandbox nature of the game has kept players coming back for several years. For a time, “Fortnite” overtook it as the most popular video game in the world. Last year, “Minecraft” took back its crown.

When we say that it’s possible to do almost anything in “Minecraft,” we aren’t exaggerating. Within reason, so long as you have the building blocks and the technical knowledge, you can virtually replicate almost anything that exists in the real world. To prove this point, a few months ago somebody built a fully functional model of a 1990s PC running Windows 95 with perfect emulation. That alone would have been an astonishing achievement – and would have been totally unthinkable to anyone involved in creating Windows 95 25 years ago – but it doesn’t stop there. Now, a user has gone a step further and created a fully-playable version of the classic video game “Doom” on the virtual PC, and everybody is welcome to give it a try.

This isn’t the first time we’ve seen “Minecraft” users attempting to push the game world’s capabilities to their outer limit. In a wonderful case of meta coding, a few months ago, we saw that someone had rigged up an in-world PC to run a basic version of “Minecraft,” meaning that people could load the game, find a computer, and then play “Minecraft” inside “Minecraft.” It was like a video game version of the popular Leonardo DiCaprio movie “Inception,” and it was glorious. That trick was performed more as a means of showing off what the program was capable of than a means of entertainment. This ‘new’ version of “Doom” takes that idea and pushes it forward, raising the possibility that other classic video games of the past might one day appear as playable content inside “Minecraft.”

This isn’t the first time we’ve seen “Doom” turn up somewhere unexpected, either. As one of the most popular and influential first-person shooter games ever created, it’s been imitated and re-imagined several times. There was a (terrible) “Doom” movie made several years ago starring Dwayne “The Rock” Johnson. There was briefly an official “Doom” game at online slots websites for a while, although that appears to have disappeared recently. Online slots websites like Roseslots.com are increasingly turning to classic video games for inspiration, and so we wouldn’t be surprised to see it back there one day. We also wouldn’t be surprised to see an online slots game based on “Minecraft” in the future. When games as relatively unknown as “Bloodrayne” have their own officially-approved online slots tie-in product, anything is possible. Even with the film and the slot in mind, though, this “Minecraft” specific version of “Doom” surely counts as the most remarkable and unlikely iteration of the original concept yet.

Those of you who are familiar with “Minecraft” and the technology that goes into to creating the more complex aspects of the game world may be interested to hear that the “Doom” game was created using a freely-available mod called “VM Computers,” which in turn uses the “VirtualBox” open-source software as a platform to run upon. “Minecraft” has existed for such a long time now that the more technically-literate members of its user base use programs upon programs to create new attractions and locations within the game, often breaking new ground in the process. By this point, it’s doubtful that even the game’s original creators imagined it being pushed as far as it has been, but so long as the game can take all of the additional code and continue to function it’s likely that it will continue to go from strength to strength for the next several years.

While arguably less exciting than the “Doom” mod, the creation of the aforementioned “Minecraft inside Minecraft” mod was made possible by running code on a separate server to record the monitor of any user looking at the “Minecraft” screen and then turning the information contained within those pixels to create RBG values, then turning those colors into new “Minecraft” blocks that are consistent with and indistinguishable from the “Minecraft” world around them. To those who aren’t trained in programming, it sounds like magic – and some people might even argue that it is – but the creation of the program provoked some concern that if people can now run code that scrapes data straight from the monitor of those watching, it might eventually lead down a dark path. In a lot of ways, that’s the problem with open-source and open-world games in a nutshell. Once you’ve started going down a path and there are almost no checks and balances applied against what’s possible for users, it can go anywhere.

Ignoring that unpleasant thought for the time being, we now can’t help but wonder what other classic games might next get the “Minecraft” treatment. If there’s somebody out there who thinks that they have the skill to create a fully functional version of David Brabin’s classic “Frontier: Elite 2,” we’d love to see it. Failing that, we’ll settle for a passable version of “Golden Axe.”