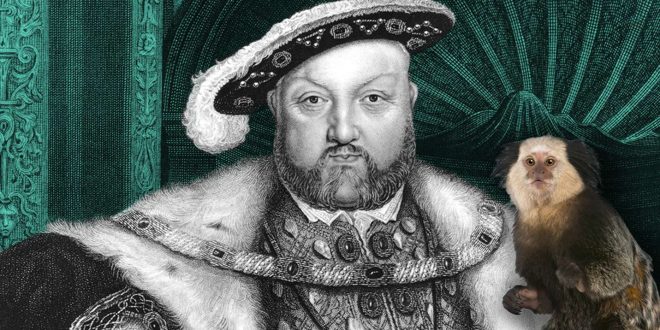 When you are a monarch of a powerful country, you have an immense wealth at your disposal. In addition, your representatives and troops venture into the unknown parts of the world as part of diplomatic missions and war campaigns. These things present a great way to form a personal collection of bizarre objects if you are into that kind of thing. Henry VIII was, and here we will explore his collection of bizarre objects. His collection counts thousands of items and took 18 months to complete and list after his passing in 1547.

A Set of Purple Velvet Bagpipes

Henry was a talented musician and composer who played the organ, lute, flute and virginal. A complete list of instruments includes 20 recorders, 19 viols, 2 clavichords, and 4 sets of bagpipes, one being the purple velvet with ivory pipes.

Henry ordered a bowling alley to be built at Hampton Court Palace, outside of London. It was around 200 feet long, more than three times longer than modern 10-pin alleys. Tudor England saw bowling as a hugely popular activity.

This weird name item is a gruesome and brutal torture instrument invented during his reign. The designer was Leonard Skevington, who was the Lieutenant of the Tower of London. It consisted of an A-shaped iron brace. The victim would sit in a crouched position, head almost touching the knees, with wrists, ankles and neck shackled. Another iron bar is then tightened, crushing the victim with huge force. The eyes, nose and ears would then bleed.

Henry adored animals and kept ferrets, falcons, hawks, and other birds including canaries and nightingales. He also owned a number of dogs, but his most unusual pet was a marmoset, a Christmas present in the 1530s. His first wife Katherine of Aragon also had one. This was kept of record, so was the polar bear given by the King of Norway Haakon IV to Henry III in 1252.

A Codpiece Large Enough to Hide a Weapon

Henry is the one who made Tudor fashion famous, with its enormous and exaggerated codpieces. The king had the biggest, enough to keep jewels and small weapons. He also had them in his armor.

This great and monstrous device had the nickname “the holy water sprinkler”, or “the king’s walking staff”. It is made of a pronged mace that holds three gun barrels in the spiked head. He would carry it around at night to check if the guards are doing their work. One even arrested him and then got a raise.

A Pair of Football Boots

A Suit of Armor with a 51-inch Waist

The demon-faced helmet was a gift from the Holy Roman Emperor, Maximilian I, in 1514. There was a whole armor as well, now, unfortunately, lost to history. Will Somers, his court jester, used it for acts and parades after Henry’s death.

What do you think about King Henry VIII’s collection of bizarre objects? What would you like to own if you could have anything you like? Which item is your favorite from the ones mentioned?