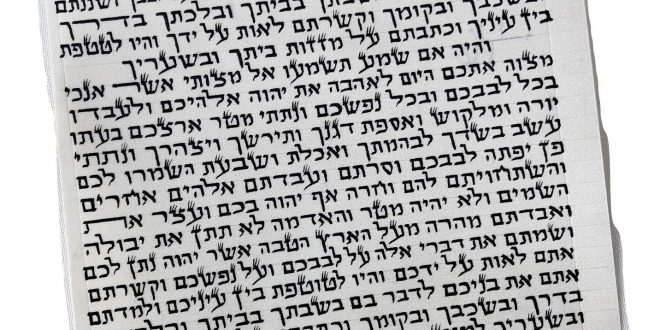 Michael Smith May 23, 2019 Religion Comments Off on The Importance of Mezuzah Scroll in Jewish Communities 353 Views

There is a famous saying in the Jewish world that goes somewhere along the lines of “A Jewish home is incomplete without a mezuzah scroll.” Why you might ask? Well as any rabbi would say, a Jewish way of life is a portable faith that you can take anywhere with you. But there are certain things that must remain in our home if we want to keep god’s faith strong. Such is the case with Shabbat, daily prayers, the study of Torah, and mezuzah scrolls.

What is the Origin of the Mezuzah Scroll?

The origin of the mezuzah scroll is a biblical one, as often quoted in the Torah. This means that mezuzah scrolls carry a lot of weight and a lot of faith with them. Deuteronomy 6:9 in the Torah says that every Jewish person should inscribe a mezuzah scroll on the doorpost and on their gates. But why does god requests that of Jewish people? What is so important of these scrolls that faithful Jewish people must hang in front of their doors? It is often quoted in the Torah that divine truths are inscribed on the mezuzah. The scrolls of the mezuzah carry a biblical weight. It is written upon them the love of god, his words, his commandments, the belief in him, and the passing onto from generation to generation. Every Jewish person must pass all of God’s commandments to their children, that way Jewish people can keep a strong faith in God. And all of this is inscribed into mezuzah scrolls.

The mezuzah is the container in which the scroll is kept. The scroll, often referred to as the parchment, is the verses of the Torah, and they must be kept close to every Jewish home.

If your home is missing a mezuzah scroll, or you simply want to buy a new one as a gift, be sure to check this site.

The Mezuzah Scroll and The Laws

A mezuzah scroll, or a klaf, must be handwritten by a kosher scribe. A kosher scribe is a religious person who is also a follower of Jewish law (halacha). This person must be qualified in order for the mezuzah scroll to be deemed holy and worthy. The mezuzah, container, can be an ordinary case. There are no special requirements from the container of the scroll. But the scroll must be handwritten by a person who is qualified for the task.

Once you have the container and the holy scroll, you must carefully roll the scroll from left to right so that the first written words appear every time the scroll is unrolled.

Once the scroll is placed into the mezuzah, the case is then to be sealed, but not permanently. This is because the Jewish law states that the scroll should be inspected at least twice every seven years, to check if any of the writing has faded.

Where to Hang the Mezuzah?

A common misconception, and one that we mentioned at the start of this article is that the Torah teaches the mezuzah to be placed in front of the doorstep and the gate. But according to newer versions, any room that has two doorposts can serve as a place to hang a mezuzah. The bathroom, the living room, the bedroom, the hallway, any room or living space with two doorposts can be a worthy place. The scroll must be hanged as soon as you’ve moved into your home.